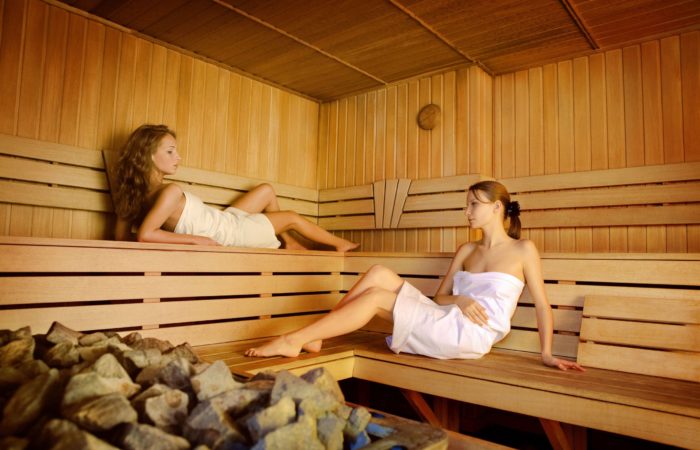 Is it worth consulting a family doctor before taking a sauna?

Moderate use of a sauna appears to be safe for most people. However, a person with cardiovascular disease should speak to a doctor first.

Blood pressure risks
Switching between the heat of a sauna and cold water in a swimming pool is not advisable, as it can raise blood pressure.

People who have recently had a heart attack should also talk to their doctor first.

Dehydration risk
Dehydration can result from fluid loss while sweating. People with certain conditions, such as kidney disease, may be at a higher risk of dehydration.

The increased temperatures can also lead to dizziness and nausea in some people.

Precautions
To avoid any negative health effects, the following precautions are also advised:

Limit time spent in a sauna: Do not spend more than 20 minutes at a time in a sauna. First-time users should spend a maximum of 5 to 10 minutes. As they get used to the heat, they can slowly increase the time to about 20 minutes.

Drink plenty of water: Whatever type of sauna a person uses, it is important to replace the fluids lost from sweating. People should drink about two to four glasses of water after using a sauna.

Avoid sauna use if ill: People who are ill should also wait until they recover before using a sauna. Women who are pregnant or those with certain medical conditions, such as low blood pressure, should ask their doctor before sauna use.

Supervise children: Children aged 6 and above are safe to use a sauna, but should be supervised when doing so. They should spend no longer than 15 minutes in there at one time.

Leave a reply Click here to cancel the reply